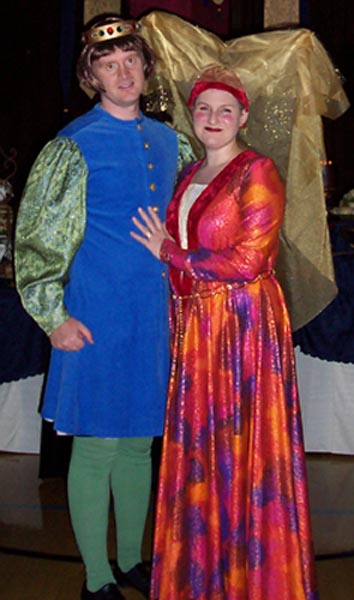 We just got back from a really fun Stake Costume Ball. Kelly has a friend that she has known for years that does plays at the college in Modesto and she has access to all the costumes so we went down and picked up these outfits. It ended up being a really fun time. There was a live band and we did a bit of boogie and whatnot. There where a ton of really fun costumes we didn't even have the coolest ones.

For the last few months Kelly and I have been trying to read the Book of Mormon. Last August the church presidency sent out a letter asking everyone to read or re-read the Book of Mormon before the end of the year. And last night we finished. We didn't exactly read it form cover to cover though. We decided to start at the book of Alma rather than at the beginning. It was my idea and I think I was just thinking that that was the fun part of the book and so we could establish the habit of reading every night in the fun part and then it would be easier to keep it going. So we read from Alma to the end and from the beginning back to Alma, and now we plan to just keep going and read it all again. We should be able to make it to the end by the end of the year. It has been really cool to read that fast. It really has helped me get all the groups straight and see the coherent message of the book come through all the story. It really is a testament of Christ. If you would like a copy they are available Here Free.

We arrived home from our trip to Billy's wedding last night at about 9:00. What a trip! When we left we expected to just hang around Friday and then go to a wedding and a reception on Saturday but it turned out to be a non-stop weekend. As you know if you have been reading, Joe's wife Jessica had there baby Ginger Helen while we were in route. Kelly was feeling sick on and off the whole time (she went to the doctor today and they confirmed that she has bronchitis and is working of pneumonia), so she didn't get to hold the baby. She did feel mostly ok on Saturday, so she got to go to the wedding and subsequent parties. The drive home was uneventful but long. We packed a ton of fun and activity into those few days. So much so that I had a hard time remembering where I work this morning.

Having stayed up all night last night, I slept till 9 or something, then we made another trip the the hospital to see Ginger. We put a ton more pics up of her. We also got to spend a LOT of time with the other kids.

Kelly and I drove to Idaho today to go to Bills wedding and reception on Saturday and as an added bonus Jessica decided to have her baby today! So we drove straight to the hospital and got to see her when she was only a few hours old. She looks great! She slept the whole time. She has a bunch of dark hair. Now I'm staying up all night with Billy. We got disgusted with Joe's Dial Up internet connection so Billy flipped on his laptop and found that there were two wireless signals from his neighbors so we are both sitting here with our laptop's at 6:30AM having stayed up all night. I think the sun may be peaking. Happy Birthday to me and Ginger!

We had another fun weekend. Kelly was off work on Saturday again. I could get used to this. Saturday we slept in till almost 10 and then we spent the day planning out our garden and chicken run that we are going to put in next spring. We figure that it's going to cost us about $120 for fencing to keep the deer out and the chickens in. The plan is to put a "mote" of chicken run around the garden. We have read that this arrangement will greatly reduce problems with insects beating you to your veggies. Another advantage is that during the non-gardening months you can let the chickens into the garden and they will keep in fertilized. We plan to get about 5 or 6 chickens and in addition to the run, build them a coup that we will lock them in at night to keep the mountain lions and whatnot from getting them. We don't really know what we are doing so if you have any suggestions we are open to them.

For those of you that may have missed this, they are building a temple close to us. Utah close. Like only two exits past where Kelly works close. It will be so awesome to have it so close and not have to take a whole day of fighting the bay area traffic to go to Oakland. The temple is supposed to be finished next spring but I haven't heard any hard dates. We are exited for both the open house where we can bring our friends and the dedication. Construction is moving along at a good pace. We go up there (its on the top of a big hill) every few weeks and Tuesday night was the first time we could see what the exterior stone would look like. You still can't see it in the web cam but they have started putting it up on the back. It's a bit darker that the artist pictures that I have seen. It looks about like the Salt Lake temple in color. We forgot the camera so we didn't get any pics of it, but here is a cool string of Pics of them putting the steeple up. If you download them and view them in a slide show it's kinda cool. 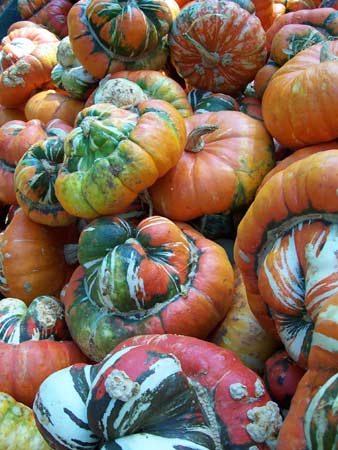 We just got back from a really fun day trip to an area called Apple Hill. It is just an area on the other side of Placerville with a bunch of apple farms and this time of year when the apples are in season they have all kinds of fun craft booths, live entertainment, baked goods and it is a good place to get nice pumpkins. People come for far and wide. Kelly's parents, brother Harry, and sister Sandy as well as Sabrina, Sandy's daughter all came up to go with us. We went to four farms. The first one was a smaller one and didn't have too much going on except for the live entertainment. This singer named Sarah Gautschi was up on stage all by her self except for her guitar and a microphone. Her voice was a bit like Alison Krauss. We ate our picnic lunch there, and I really enjoyed listening to her. The next one was a place we went to last year and where they have really great pumpkins. This one also had a really fun band called Farm Fresh. They were all fairly young and they were on the back of an old Chevy flat bed bustin' out some fun "high energy" blue grass as they call it. They weren't technically perfect performers but they were really fun to watch and listen to anyway. I guess that's the high energy thing going to work for them. I would definitely pay to see them play. The third farm had a little train going around the lake, and some of us got to ride it. The last place I think is the biggest farm up there. They have all kinds of stuff going on: a fish pond, tons of craft booths, They sell all kinds of apples and my favorite of the day is the apple fritters they sell. They are so good it's to die for. They have just the right combination of crispy and squishy and a ton of fresh! This morning Kelly and I went to the feed store and picked up a bail of straw to set outside our front door and put all our pumpkins on and now it looks great. The Pumpkin picture is linked to a page with all the pics from the day in full resolution so Kelly"s family who forgot their camera can download them if they want. 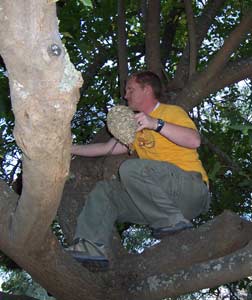 Kelly and I were at the grocery store the other day and they had these woven bird houses made from deferent kinds of grass and moss and they were only 99 cents so we got 3. Today we put them up in the tree in our front yard. We don't expect to see any birds in them till spring but we hope we will have some residents then.

This weekend the Mormon Church held its semi-annual general conference. Kelly and I have always really enjoyed listening to or watching the conference. This weekend however, Kelly's sister was moving so we spent most of Saturday helping her move. By late afternoon we were all kinda wasted so I knocked off and, took Kelly's brother to the Priesthood session in the evening. The cool thing was that Kelly parents have one of those cool TeVo style cable things that let us record the sessions that we missed so we watched the morning session Saturday night and picked up most of the Saturday afternoon session Sunday evening. We went home from Kelly's parents Sunday night pretty much wiped out from a very full weekend.