We live at about 1500 feet and I have never heard anyone talk about it snowing here. Oh sure a few hundred feet up. Even in Placerville maybe. Heck twenty minutes up the hill it snows every year. But it Never Ever snows here. Except this weekend it Did snow here. Friday night it snowed a good inch of real snow. Not 5 days before this picture was taken we sat at that table enjoying lunch in the sun and then had a nap on the lawn in the sun and now snow!

I have a mixed history with Valentines day. For starters not a few of my dating relationships ended just before valentines. Secondly, I failed to meet Kelly's expectations for our first valentines day. Possibly this was partly due to the first but was also largely due to my personal tendency to undervalue sentiment. Last year as our first V-day married and in an effort to mitigate damage done by my nonchalants the previous year I took Kelly back to the very nice restaurant where I took her on our first date. It was a very nice evening but also out of the question this year because of the associated expense. Basically I don't really like the idea of a day dedicated to loving our lovers. I love Kelly every day and I do nice things for her all the time. Having a day for it only adds a sense of obligation that overshadows the freewill nature of my baseline benevolence. For example if you buy your wife chocolates on a normal day you are the hero, bring them home of V-day and you get a check mark on you V-day expectations check list. That being said I do love a good date night and there is nothing I would rather do than spend an evening with Kelly. What we ended up doing this year may go into he books as my best Valentines Day ever. After work I came home and picked up Kelly and we went down to Folsom and placed an order for pizza at a take out place and then walked across the street to a garden center to kill the 45 min before it was ready browsing their selection of spring flowers. After picking up the hot pizza I took Kelly to one of Folsom's historic land marks to eat it. In Old town Folsom there is a large railroad turn table that was apparently used to turn locomotives around at the end of the line back in the day. It sits right in the middle of a parking lot for the modern commuter train but I though it would be a fun spot to enjoy the unseasonably warm evening and a pizza. After dinner we walked along historic Sutter street and popped into Snooks Candies to get a small box of chocolates. Then we rounded out the evening with a short walk down the bike path along the river. I think Kelly had as nice a time as I.

"The things that matter most are the things that last the longest". Kelly and I went to the temple Friday. The Oakland temple is a grueling two hour drive from here through heavy traffic. We hadn't been in a while and Kelly had prepared her grandmothers work to do. It was a wonderful relaxing and uplifting afternoon. We had the opportunity to do the sealing for her grandparents. This was an opportunity for us to remember our sealing and renew our marriage covenants. I love Kelly so much. She is the most important thing in all creation to me. To be sealed to her for time and eternity is the single greatest blessing in my life. We spend so much time and energy on the mundane things of daily life the temple is a rare opportunity to focus on the things that matter most. 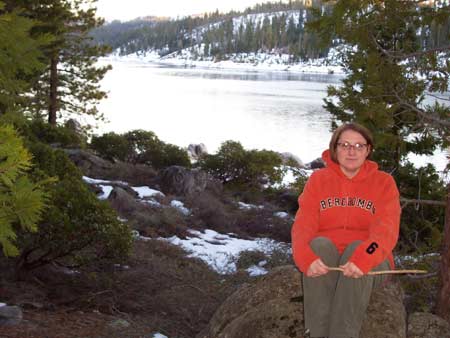 Last night Kelly and I went up to Ice House Lake. The drive up makes the trip worth while even without the destination. The road is never straight and it follows a ridge line surrounded by excellent views for quite a while before cutting through the El Dorado National Forest to the lake. I love to drive on windy forest roads particularly when the views are great. The lake its self is a resent discovery of mine. I knew it was there but I also knew it was popular with the weekend crowds so I never bothered to check it out. In the winter however visitors are few and the lake is just as beautiful. The north side of the lake has several Geocaches on it. It seemed like a nice after church family activity to go walk along the lake shore to find this cache. Buy the time we got up there the sun was low and gleaming off the lake. We had intended to snowshoe but the snow was mostly just in patches so we opted to leave them. We poked along on the way out only half committed to finding the cache but when the sun was low enough that we should have been thinking about heading back we were so close that we couldn't. It took us a while to find the cache due to it being in a rather shadowed from the sky (bad GPS reception) spot behind the levy. I finally climbed back up the levy and walked along it with the GPS to find the line where it was closes to the cache and then we found it fairly quickly. By the time we got it signed and everything put back and started back to the car the sun was dipping behind the trees. We ended up walking back on a road that was covered in slick, uneven ice and snow in the dark. What a blessing it is to live so close to such abundant beauty. I'm not really a big fan of the sierra club but I can sure see where they get their inspiration.

My Cousin Billy recently had his car, a beloved Toyota stolen. Happily he has since reclaimed it. Though it is not without evidence of it's ordeal. Billy has been able to ascertain that at least one of his cars malevolent passengers at some point during it's misadventure is an "escort". An escort who uses Yahoo and CraigsList to get work. An escort who felt the need to carry in her purse an assortment of condoms and drug paraphernalia as well as bed-roll of sorts. The car-napers also removed from his car registration and insurance cards. He now fears he will be the target of identity theft. As I consider what the implications of this kind of event would be had it been my car I think that Billy is quite graceful. I would be furious a racked with desire for revenge. His actual loss is quite small he got his car back and the worst of the damage is that the thieves removed his "Peace is Patriotic" bumper sticker. The crime to me however would be greater than the sum of the damage. I own three automobiles a 79 VW bus that I can't get registered in California, an 87 Jeep Cherokee that I drive every day, and a 99 Subaru forester that Kelly drives every day and we take on most of our trips. I love each of these machines more than can be logically accounted for. To think of them being violated in the manner that Billy's car was makes my blood start to simmer. I just spent about six hours under the hood of my jeep installing a new power steering pump. I have spent countless other Saturdays working on both my other cars. They are part of my identity. I love to drive each one of them for there unique qualities. I miss the two cars that I have owned and due solely to financial pressures had to sell. I have many great memories that include each of them. I would hate to have to add to my memories the imagined adventures of my car in the hands of villains.