Three or four years ago I built a dry ice powered canon that would launch 2 pounds of candy (starburst are best) about 100 yards with my cub scouts. It was a big hit with the scouts as you can imagine, and won me a place among the best den leaders every. The launcher also had limited success at the 2003 triannual family reunion, where it had one or two final launches before a malfunction due to icing up on the valve caused it to crack. I never bothered to fix it as it had served its purposes and then some. Well this year is another reunion, and I decided to build a new canon using some of the old parts and design but with some changes. This canon relies on an air compressor for power rather than the finicky dry ice. While this is nowhere near as cool, it has a number of operational advantages. I have a nice big 12-volt air compressor that my brother Joe gave me. It runs off a car battery so it is as accessible as a car rather then having to find and store dry ice. Also the pressure in the reservoir (bigger) chamber is easier to control. Anyway, got it all together tonight and I'm getting exited to pop off a few rounds with it. It should prove endless fun at the reunion. Well… as long as the candy holds out. 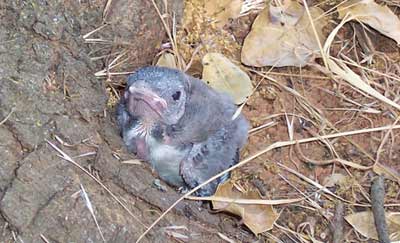 Friday evening on our way up to check on our garden I spotted a gray creature out of the corner of my eye. It startled me and at first I thought it was a rat or something. It was a baby bird. He stared up at Kelly and I with a grumpy expression. He seemed so out of place and forlorn there on the ground by himself. Kelly was very concerned for him as was I. We looked in our book called Country Wisdom & Know-How. It gave us the basics. Mostly it said leave them alone. We tended our garden and reluctantly did nothing. We went back in the house and watched him for a while thought binoculars. We learned that his mother is staying nearby and taking care of him. Saturday morning I fed him several worms. As of tonight he seems to be doing fine though we remain worried that one of the many neighborhood cats will get him. At one point we made him a nest of weeds in a box and put it up in the tree but he soon jumped out and was back on the ground in peril form the cats. He moves around and we find him in different places but so far always within a 10-foot radius or so. We remain worried about him but resolved that he is following nature's pattern. Apparently, this in not out of the ordinary for young birds. I have concluded that he is a Western Blue (or Scrub) Jay by identifying his mother who seems to be getting more and more comfortable with me being near her young.

In order to facilitate watching our garden grow I have moved it to it's own page. I collected all the old posts on it and included them and from now on I will only be posting progress reports there. This will also allow me to post more pictures without diluting the journal. I have also added a link on my stuff page that will make it easy to find in the future as this post roles down.

I have talked about this before but they are building a temple very near us. It's called the Sacramento temple but it's really in Folsom, so it's very close to us. The open house will be July 29th through the 26th of August. This is where the pubic is given a rare opportunity to take a tour of the temple before it is dedicated. Once the temple is dedicated, on the 3rd of September it will be closed to the public. They are expecting more than 150,000 people to attend the open house and they have asked the members to serve in various capacities during the open house. Kelly and I have been assigned to be parking attendants and greeters. This morning there was a training session at the temple ground to fill us in on what we are supposed to do. In typical Mormon meeting fashion it was an hour and a half long meeting to pass along 20 minutes worth of information, but it was nice to go up and see the temple and see the excitement that everyone has for it. The building looks complete on the outside now, though the ground will need a lot of work before July 29th. It has been really fun to watch it all coming together over the last few years. 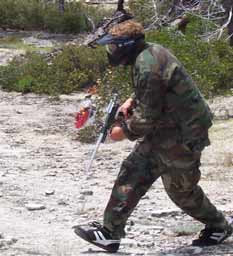 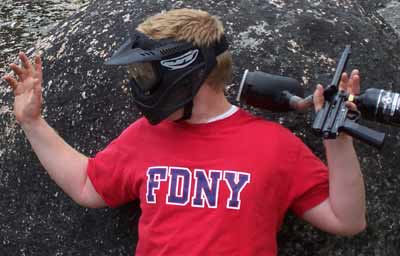 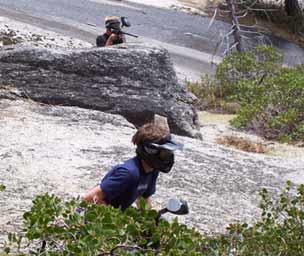 Thursday I took the day off work to take a bunch of the scouts up in the mountains. They were going up for a long weekend but I could only take one day off so I was just up Thursday. Everyone met up in the Safeway parking lot at 7 to buy three-days worth of food and then we loaded every one up. Once we got to the campsite and got everything set up the guys all wanted to go play paintball. All of them have there own gear and play all the time. Some of them are quite good. It was my first time and it showed. They all had camo, long pants, and sleeves even though it was warm. I was wearing a red T-shirt and shorts. We played three games where we broke into two teams and the team to annihilate everyone on the other team first won. The first round I stuck close to Eric (another guy on my team) and we covered each other and made our way into range of a group from the other team. Then he ran out of CO2 and had to give up. That left me pinned down behind a tree. I exchanged paint with two opponents for a while until I got bored and tried to fall back so I could make another advance where there was more cover. Just before reaching cover on my retreat I was hit in the ankle and was out. I walked back to the top of the hill where out player went to wait for the end of the game and found all but one of my teammates and no one from the other team. It was Brad against the entirety of the other team. At that point I figured the game would soon be over, but employing stealth and a snipers "never fire from the same location more than once" strategy, one by one Brad picked off the members of the other team. We played two or three more games and my performance was no more notable than in the first. The last round was punctuated by my goggles foggin up so bad that when a guy popped out of the brush I didn't know if he was on my team till he had drilled me in the forehead. It was really fun. The terrain was great! brush, boulders, creak beds, and trees as well as fairly large open areas. We went back to camp and spent the rest of the day hanging around in camp waiting for the ski boats to show up. When one finally did at about 7pm we all piled in and took it out. The boat was kinda overloaded and the water was cold so only a few of the guys did a bit of wake boarding. Mostly it was just fun to be out of the water. I helped get the boat out and then headed home to find Kelly already in bed. Sleep came fast and so did the sun. 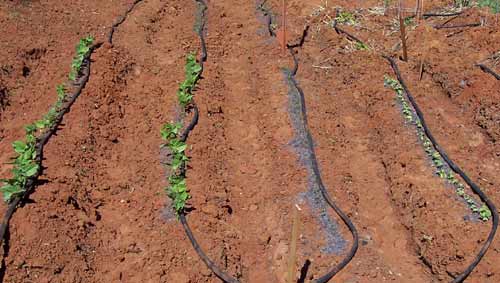 As any of you who read here know. Kelly and I are growing a garden. It's starting to grow. There are definitely green things popping up. Disappointingly the tomatoes are not looking very good at all. I'm not sure why they are mad at me. The beans are the real performers. They are by far the biggest. A distant second are the radishes and then the carrots both of which we have now culled out a bit to let them grow. I'm worried though. I don't think our soil is very good and I'm afraid that as they get bigger they will not be able to get that they need to keep up the growth. I will be doing this kind of report from time to time at the request of one of my best readers. If anyone knows why we are doing wrong with the tomatoes let me know.

Kelly just had a birthday last month and I guess that is what has got me thinking about all this. I don't feel old… Most of the time I don't feel old. I don't recognize the names of many of the bands in the top 40 anymore. When I was a teenager or even in my early 20's I kinda thought of 30 as "Old". I was kinda fearful of being "Old"; or rather I was fearful of loosing my cool. It was like I was embarrassed for my future self. Now I'm coming up on 32 and I really am fine with my age. From where I stand now, I'm cooler then I have ever been. Would 19 year old me think so? I really don't care about silly old 19 year old me. I think the secret to all this lies in the very root of coolness its self. To teen me, cool was a person who had there own style and projected a confidence that it was cool. Now cool is more casual. I still think it's cool to have your own style but only if you are really comfortable with it. In other words, it's more important for it to be genuine than unique. The thing I keep coming back to is; why did teen me think thirty year olds were so un-hip. By my old definition I think I'm very cool. By my new definition I think I'm very cool. By my new definition thought the older you get the cooler you become. Take this as an example. When I was a teen my dad bought a pair or bright RED Nike shoes. At the time I did NOT think they were a wise fashion choose. They just plain looked silly to me. The thing is, now I look back and think, that man was way cooler then me. He had the nerve to wear those shoes because he liked them. They made him feel good for whatever reason and so he wore them. So as you grow… shall we say more mature. Cool becomes judged more by what we think of our selves and less by what we think other think of us. This is how we end up with middle aged men running around in bright red Nikes and minivans with bumper sticker that say "my kid's an honor student" so my advise to teen me is that, that kid who had his own style and had so much confidence that it was cool, was cool; as cool as you would be if you were worrying about what you thought was cool rather than what everyone else did. Believe you are cool and you are. In the words of Shakespeare: "To thine own self be true" In the words of Dr. Seuss: "there is no one alive who is you-er than you"