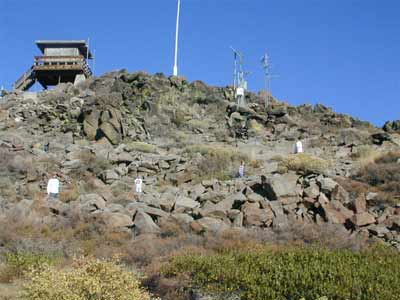 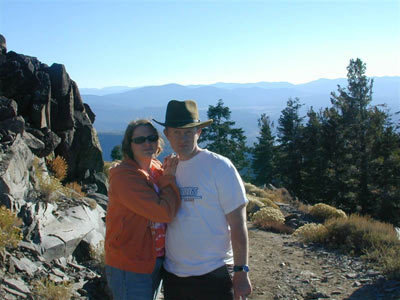 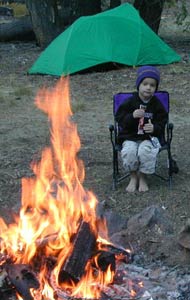 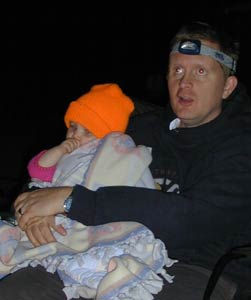 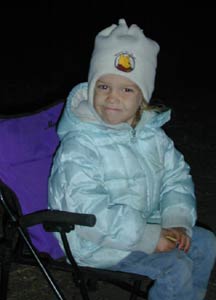 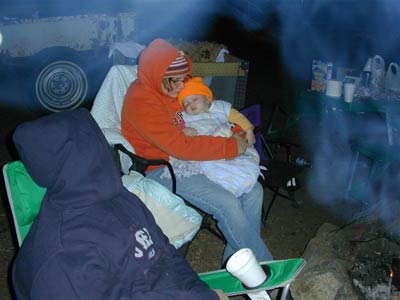 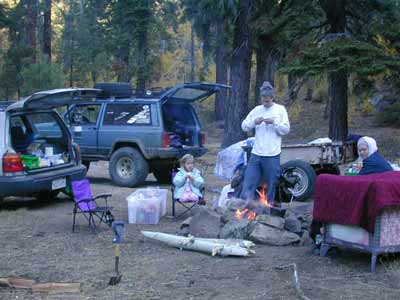 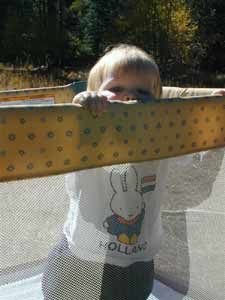 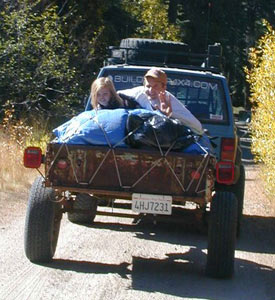 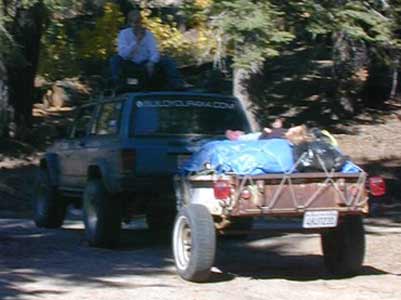 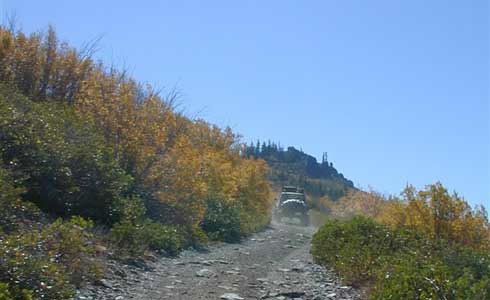 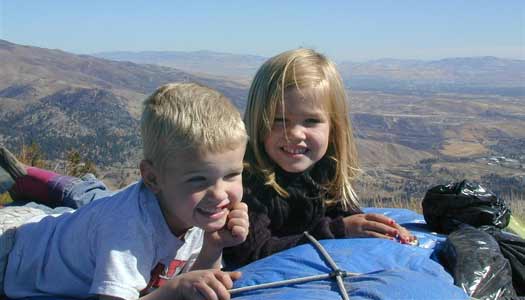 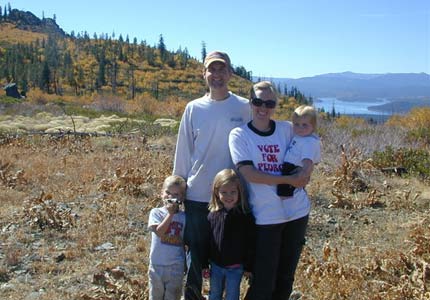 Joe and his family came down for a quick weekend to go camping with us. The seven of us pilled into my jeep pulling my new old trailer and my Subaru forester and went up into the Sierras north east of Truckee to drive a trail called Boca Springs road. Driving up Donner Pass on the way there the clutch hydraulics on my jeep went completely out. We stopped in Truckee to see if we could get it fixed at all and have lunch but we finally concluded that Truckee is just too small a town and we would not be able to get it fixed fast enough to continue on the trip. Several places said they could get the parts and do it Monday. "No thanks". I'm actually pretty good at driving with no clutch from my truckin' days and I did drive my jeep everyday for about 6 or 8 months with no clutch a few years ago while I was figuring out a tranny swap. So we decided to just keep going. Especially once on the trail not having a clutch is no big deal. In low range it will start in gear even on a steep uphill. Once we were on the trail we were absorbed into some really great country. The trail follows Boca Ridge. From the Verdi Peak fire lookout we could see way out into the sierras including Stampede Reservoir looking west and out over Verdi and Reno Nevada looking east. Then we dropped back down to Boca Springs to set up camp. We found a spot that looked really good but we kept getting a wif of something foul in the air. We finally tracked the smell to a really big pile of what we could only assume was bear poop. After burying it the air quality improved rapidly and we began to unpack the trailer and set up camp. Camping was probably the best part of the trip. We were right next to the road but not one car passed from the time we stopped till late the next morning. A steady light breeze kept the smoke from the campfire always blowing away from us and while it did get kinda cold after the sun set we had come prepared and everyone was warm enough at night. We ended up with an absolute ton of food and because of the bear sign we wanted to be sure that if the bear came back he would not get our food. Joe and I figured out how to get forty pounds of food in a big plastic box hoisted up into a tree to keep it out of reach. The bear never showed but every time someone had to get up to go the bathroom/bush the rest of us would get freaked out thinking it was a bear. The next morning Joe got the fire going again and we got up a sat around the fire for several hours eating a junk food breakfast and chatting. There is something primal about sittin' around a campfire. We finally got all packed up and ready to role and the kids wanted to ride on top of the packed trailer. The top layer of stuff was mostly blankets and that was all covered with a tarp and a bungee net. Joe rode up on the roof rack to keep an eye on them, and we just went really slow. It didn't last long but I think the kids had fun. The trailer was really incredible. Its springs seem to be just the right rate for this kind of use. It allowed us to have lots and lots of room in the cars, and bring a stupid amount of stuff. I couldn't have been more pleased with the way it preformed. On the way out toward Verdi we went over a pass between Beacon Point and Granite Peak where we stopped for awhile to enjoy the views and take a few pictures. The drive home was kind of stressful due to the clutch and to make thing worse at the gas station in Verdi the pump came out a sprayed Jessica all over including the eyes. When we got home Kelly and Jessica when to Ikea in Sacramento while Joe and the kids sacked out. We may have tried to pack to much action into two short days but for all its problems I think we managed to have a memorable time and have a lot of fun. 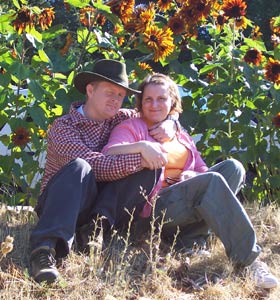 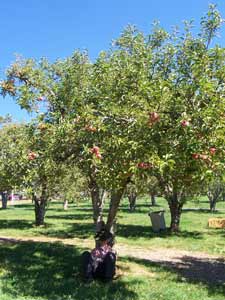 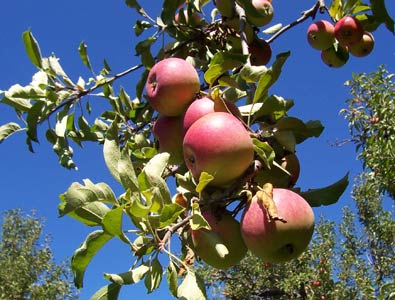 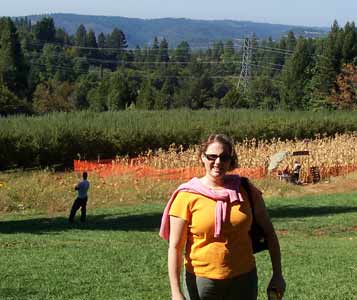 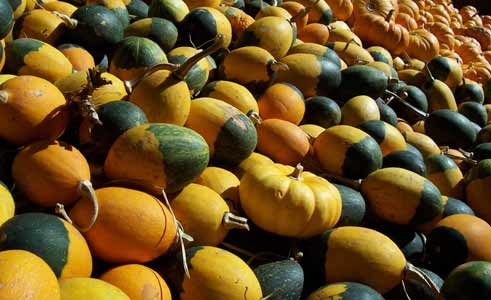 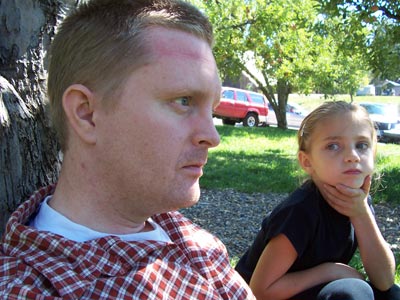 It has become a bit of a tradition for Kelly's parents and family to come up for Riverbank/Modesto and come with us to Apple Hill every year a few weeks before Halloween. This is the third year. Apple Hill is just an area about 20 miles east of us where there are a lot of apple orchards. The word on the street is that back in the 1840's members of the Mormon Battalion working there way back to rejoin their families in Salt Lake were the first to plant Apples in the area. This time of year most of the farms open up to the public and the whole area takes on a bit of a festival kind of atmosphere. There are craft vendors and live music as well as all manor of fresh apple related food. The apple fritters are to die for.
This year it was Kelly's parents, Kelly's sister Sandy and her daughter, and Kelly's brother David and his wife Nancy and their two sons. The first year we were just poking around, but this year we had it all figured out. The first place we hit has a nice apple orchard with grass growing around the trees and picnic tables and hay bails to sit on. It makes the perfect place to have a picnic lunch. Next up is a farm called Kids Inc. This is the place to get all your holiday pumpkins. They have a big you pick pumpkin patch as well as all kinds of pre picked pumpkins and gourds of every description and color. They also have really good pie and the last two years they have had a live band called Farm Fresh. The next stop is mostly for the kids. Two farms across the street form each other. One has pony rides and the other a mini train. While the kids rode the train I watched a guy carving a bare out of a log with a chain saw. At the last place we actually parked in the orchard amongst the trees. They have the fritters as well as really good apple juice. They have a fishing pond and some more craft both sans shops and a restaurant. By the time we finished up here we were all fairly tired and but well fed and happy. 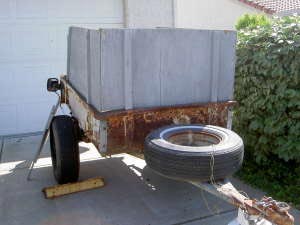 I am now the proud owner of a rusty old utility/jeep trailer. While it ant much to look at, but it followed me home on the one hour drive at freeway speed without the slightest hint of sway or buck. I have wanted one for some time so that I could move stuff around. Like: I can now go get manure for the garden next year, and the other day I had to borrow a friend's truck so I could go pick up a dryer. But I have some not so secret plans to turn it into an expedition style off-road trailer like the Australians and Africans are fond of. We went to pick it up after the last session of conference today. 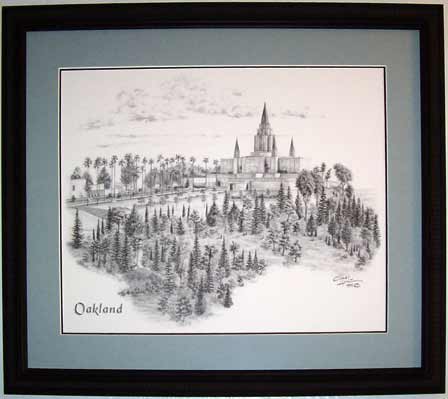 I wanted to get it back home before dark because I didn't know what kind of light plug it used or whether the outlet on the back of my jeep even works for that matter. Anyway, I have been watching craigslist for about six months for a suitable trailer and this one has popped up several times. I even called the guy about it a few weeks back but gave up on it when he told me it had 6 lug nuts rather than 5 like my jeep. (I wanted interchangeable spares) but I finally decided that it would get me started and for only $150 it seemed like I couldn't go wrong. I'm not sure how much I want to do to try and fix this one up. While it is a very rugged design, there is very little there that I don't want to change in some way. That makes me think perhaps I should just use this one as is and kinda use it as an experiment to discover what I want when I finally have the recourses to build one just the way I want. We are planning a two-day trip into the high sierras for the middle of October and I am exited to pull it and see how it will do on a mild trail.

Kelly and I were married about two and a half years ago. For our first anniversary my parents gave us a print of a pencil drawing by Chad Hawkins, depicting the Oakland Temple where we were married. It was so nice that it demanded a nice frame, but it ended up in our spare room just sitting in its cardboard shipping case. When we were going through all the stuff in there for our recent remodel we found it. Since we expected my mother and sister Ruthie to come visit us in just over a week we took it downtown to get it framed and matted. We planed to have it hanging prominently when they came but we were informed that it would take two or three weeks to get it back. We were disappointed and a bit embarrassed to have forgotten about it for so long. My mom and sister have come and gone but we now have a very classy addition to our living room.