Today is the anniversary of the very first post in my blog. It's been a good trip around the sun. I spent some time looking back on the years record and I am amazed at how much there is. My rate of posting has tapered off a bit but I think I am at a sustainable level now. There have been a few holes in the record (like April) and there may continue to be. Even so, I now have a record of my life for the last year that is more comprehensive than any other part of my life. My goal was to keep a journal and through this medium I have been able to do so. I wanted to do it for myself and for my posterity but somehow having you all, as a live audience has been the motivation to make it work for me. Thank you for reading. I hope it has been fun for you. 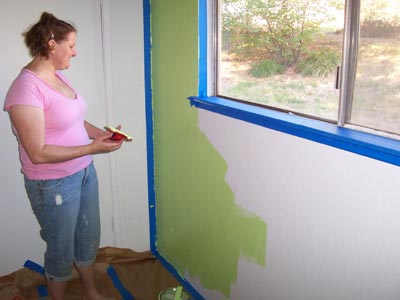 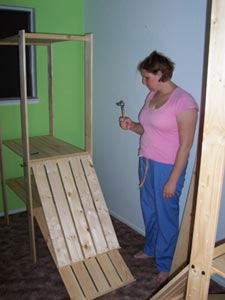 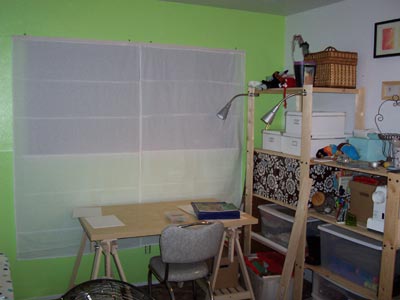 Over the last week or so Kelly and I have been working on fixing up our extra room. The apartment we moved out of when we moved here had all kinds of closet space and nooks for storage. This place has almost none. It does have an extra bedroom that we didn't have before, so all the "Stuff" got piled in the extra room when we moved. Over the last year or so we have given a few halfhearted efforts to organize it. We got a bunch of Tupperware totes at one point, but none of our attempts netted us a room that we would actually want to use or be in. It turns out Ikea is the secret to all such problems. Kelly found a storage shelving system that they carry that is very low cost and versatile and as a bonus it fits our room almost exactly right. We also decided to get a variety of Ikea storage boxes so that everything would have a place. Along with the new organization we decide to brighten up the house be painting one wall in the extra room and one wall in our bedroom American traditions, semi-gloss, Afternoon Delight green. The pictures are of the room as it is today but it is not quite done. There are a few things that still need to find a home and we are working on labeling boxes. The roman shades need to be hemmed and some of the picture frames don't have pictures yet either. I can tell you thought that this is a big improvement. There was barley enough room for two people in here a week ago. I also plan to move my favorite chair and laptop station in there. The desk that you can see will be Kelly's workstation and I will claim the other corner. We have realized that this will actually allow for a possibly substantial change in our relationship. Up till now we have never had more than one usable living space. That means that now one of us could be watching TV in one room while the other in reading a book in the other room, or one of us might be knitting in one room while the other is using the internet in the other room. Kelly and I really enjoy being together even if we are not doing the same thing, so we will see how it goes. May be we will end up still in the same room even though we have options. Anyway it was fun to do the project together and even more fun to see it nearing completion.

Yesterday was the dedication of the Sacramento Temple that we have been waiting for for the past several years. The plan to build was announced way back in April of 2001 about the same time I moved out here, but it took three and a half years to get the details of that plan worked out and they didn't break ground till August 2004. At that time they were saying that it would open in the spring of 2006 but that date slipped and slipped again. Finally the dates for the open house and Dedication were set and we could start to count the days until we would have a temple in our midst.

Yesterday morning we attended a closed circuit broadcast of the first of four dedication sessions at our stake center. President Hinckley presided over and conducted the meeting. He spoke of the reasons for temple building and the blessings of them, as well as the history of the church in this area. Mormons have a long history in this area. Members of the Mormon Battalion first came to this area on their long march home form the Mexican American war. It was a member of this party that recorded the date gold was discovered and Coloma only a few miles for our home. A ship full of Mormons led by Sam Brannen also landed in San Francisco (then Yerba Buena) and more than doubled the population of that small outpost. There is a major highway near here called Mormon emigrant trail and an area called Mormon island. At one point during the meeting President Hinckley and others left the temple and went outside to perform the ceremonial sealing of the corner stone if front of a large crowd and the press. Hinckley talked about how in older times when temples were made of large stone the laying of the corner stones was an important event symbolizing Jesus Christ at the chief corner stone (Ephesians 2:20). He used a trowel and what looked like a really big butter knife to put mortar around a stone with the date on it and then invited several others to do the same including a few children. The dedicatory prayer was given and the meeting was concluded by Thomas S. Monson.
Because it is a smaller temple, appointments are required in order to attend. Kelly and I, as well as my mother a sister Ruthie, have an appointment to go on Saturday the 16th and are very exited to go for the first time.