Kelly and I have made our way to Texas. After work Friday we drove down to Kelly's parents in Riverbank to see them and start our Christmas holiday. Saturday night we gave our presents to them and and opened the things they gave us. Sunday morning Kelly's Dad gave us a ride to the Sacramento airport. We got though security without any delay and arrived at our gate with tons of time to spare. Kelly was working on her last of a long list of knitted gifts. We watched about half of The Terminal on my laptop before they started boarding the plain. The flight was uneventful which is the best kind and landed at DFW about 25 minutes late. Jessica and Ruthie where waiting for us at the baggage pickup and drove us to my parents house. We have been having a great time ever since. Yesterday there was a big party with all of moms family. Last night we acted out he nativity with Kelly as Mary me as a wish man and winter as a sheep. This morning we opened even more presents. Through out this whole time we have eaten our selves silly and squeezed in a daily nap.

Third and final trimester! Roko as he will be named, is a boy if you don't yet know, and he is doing very well by all indications. He is right on average for his age, size wise. He kicks his mother all day and night. Kelly is about the cutest pregnant girl you ever saw and I'm am getting very anxious for him to come. I don't know what ells to say about it but that we are excited. This is the list of our top 10 favorite names in no particular order. Feel free to weigh in. (I know we only got 9)

Wednesday night I couldn't get to sleep. (maybe that contributed to the jeep door melee) When that happens I often find I better get up and do something useful rather than lie there not sleeping, or doing anything. The problem is what to do at 12:30? You can't make any noise. Anyway I ended up redoing the banner you see at the top of the screen. The old one has been up almost since I opened this site three years ago. So a fresh look seemed over due. The picture is from a trip I took with the scouts from our ward back in September. I like it a lot. The scene reminds me of a happy day just like the last one and I think it looks nice. 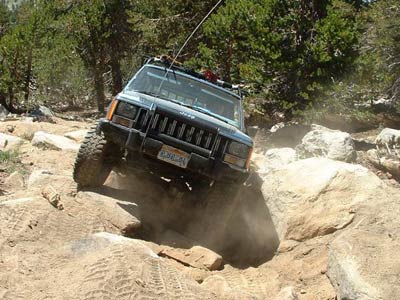 My jeep is an 87. Twenty years old this year. It has had a hard life for the last few years. Actually it had a really soft life before I bought it. I moved to California in April of 02 and bought the jeep shortly after. The guy I had bought it from got it just out of college as his first new car, and had taken really good care of it. It had been kept in the garage and the paint was immaculate. There was not so much as a door ding in it. The interior was no different, clean and spotless. In those first few years after I got it I lifted it about 5 inches and put big tires on it. I geared down the axles and put lockers in it. Then I proceed to wheel it on some of the sierras legendary trails. It was fun times. But it was hard on the jeep. As a unibody the Cherokee is light and wheels well but it also twists and flexes as you wheel it. Over time this starts to show in all the welds and joints and in the doors. My jeep is a two door and so it has longer doors and they just haven't closed all that well since I bounced the jeep down some ledges in Moab with my dad. I haven't really wheeled it hard since I got married. Though I still use it to get up in the mountains several times a year. So for a long time my plan has been to buy a newer 99-01 and move all my modified stuff over to the new rig thereby essentially replacing the body.

Anyway I told you all that as background to what I am about to tell you now. Wednesday night I was looking through the jeeps for sale on craigslist and sort of wishing I was ready to get a new one, but knowing that it wasn't going to happen for a while. It's a perennial pastime. Thursday I worked late and was driving home in the dark. As I turned onto the washed out dirt road thats the back way to our house, my jeep bounced over some ruts and I thought to my self... though it would be nice to get a newer jeep I don't need one to be happy. Life is great and it makes no difference what I drive. I have Kelly I don't need anything. I pulled into the driveway not two minutes later happy and full of gratitude. I jumped out of the jeep and took my foot off the brake at the same time. The door caught on the chain link fence as the jeep started to roll back. I tried to pull the door closed but the jeep kept rolling back. Finally I jumped in and hit the break. I restarted the jeep and pulled forward. The door had bent way forward and now would not close at all. I tried to close the door but it was not happening. Even if I bent it closed the latch no longer lined up with the frame catch. The hinges were partially ripped out of the sheet metal. It was a mess. I was an idiot.

I thought a lot about getting a new jeep that night. I looked at many of the same jeep online I had looked at the night before, but this time with a new sense of reality. I could just give up on this one. I even emailed a few of them. I could just take the door off all together and drive it like that for a bit. No option seemed like a good option. The next morning. I strapped the door to the passenger seat and drove it to work gaping open about 4 inches. It seemed like every car that drove past was thinking what an idiot. I left it sitting at work with the door hanging open. At lunch I stopped at a body shop that is in the same business park that I work in. The guy there said it would be no big deal to make it work as long as it didn't need to be pretty. He quoted me $306. I had Kelly pick me up and by Friday at lunch when I went to pick it up the door was closing beter than it had for years.

A cautionary tail about parking next to chain link fences on slopes indeed but also about how the things you have are great and how you shouldn't give up on them... not yet.