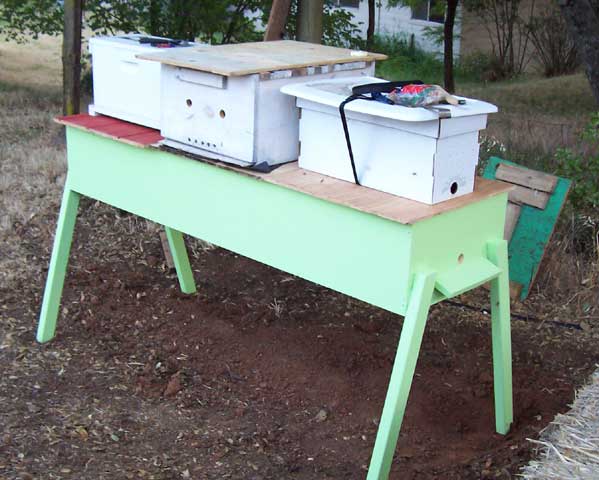 This is my new hive. I built it almost two weeks ago but I had to get it painted and I wanted to put it in the same spot as I had my temporary hives sitting on an old straw bail. So I had to move the bees, move the hay and then level out the ground (if the hive is not level the bees will build comb level anyway and mess things up) and then put the bees in the new hive. I got it all done tonight, as it was getting dark. Ants are invading my weakest hive. When I opened it up to move the bees there were ants everywhere and the bees were noticeably upset. I first tried putting Petroleum Jelly around each leg and that seemed to stop them cold. But a few hours latter and it was barley even slowing them down. It may be that as it got cooler the ants could walk on it or maybe they just figured it out. Either way I had to do something or my poor little girls were going to get eaten out of house and home. So I cut some OJ containers in half and put them under the legs of the hive and filled them with water. I don't think this is a very good long term fix as it will rot the legs of in short order, but I should buy me some time to get a better solution. You may notice that this beehive dose not look like the kind you see most commonly. The kind you see in orchards and sitting if fields are called Langstroth after the guy who invented them. My design takes much of that and blends it with the kind of hive my dad like called a top bar hive. I think the best description of mine is that it's a horizontal Langstroth. It is essentially a single Langstroth deep box that is 6 feet long with a screen bottom. I also am just using starter strips of wax rather than plastic foundation like the pros, partly as a mater of cost but also wanting to let the bees build comb any size they want. I moved one hive into each end of the box with a divider board separating each one. My thinking in building in this way was that it would have the following advantages to me:
1. It would be relatively easy and quick for me to build
2. I would not need to move my bees out of the Langstroth frames they were in
3. I could use many of the management advantages of a TBH

Kelly has been at girls camp all week. This marks the longest we have been apart in the last three years since we have been married. Just like when I was single, I have not had the TV on at all. I have been knocking things off my to-do list at a rate hitherto unprecedented. Just to name a few. I fixed a nagging problem on my jeep suspension. I de-grassed and leveled a place around where my new beehive is now. I took care of all the details and got my bees moved out of there cramped temporary shelters and moved them to there spacious new digs. I fixed my generator. I went and picked up an A/C unit that a friend wanted to give us. I mowed the lawn. Even straitened up around the house a bit. I have also been building a web site for my sister, though I'm not making as much progress as I had hopped due to all the other projects I guess. I have been eating like a king!... 10 for $10 pizzas every night. Saturday morning I may go play paint ball with friends.

It reminds me of my single days. I would have several of what I called projects going at any given time. Things from making some modification to my jeep, to building some kind of projectile device. Now-a-days I am lucky to have time to fix the stuff that breaks and take care of the things I have to do.

Now don't go off thinkin' I don't like being married. Quite the opposite is the case. Sitting around doing "projects" has limited appeal and grows old really quick. I miss talking to Kelly, and a lot of other small things about having her around. I am going to be exited to see her and I'm sure we will have a lot to talk about this weekend.