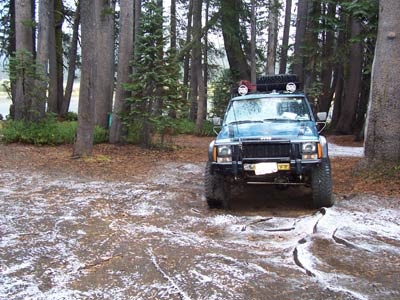 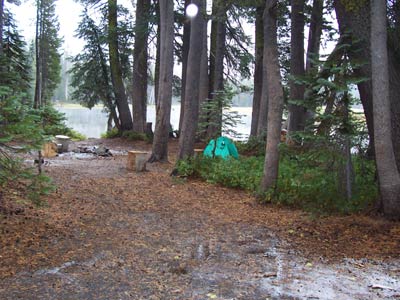 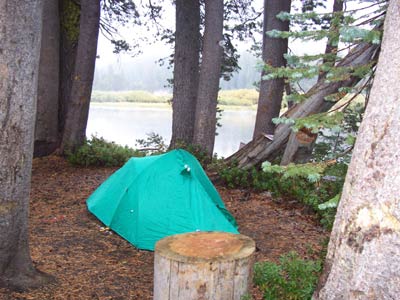 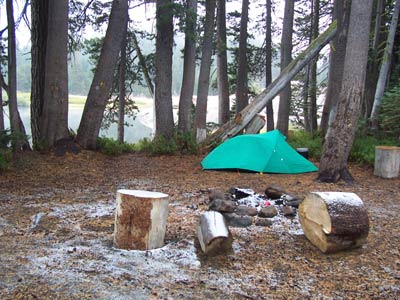 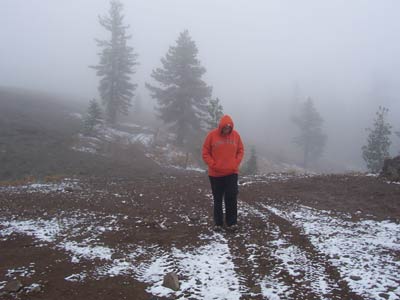 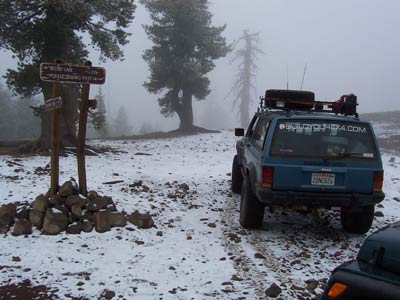 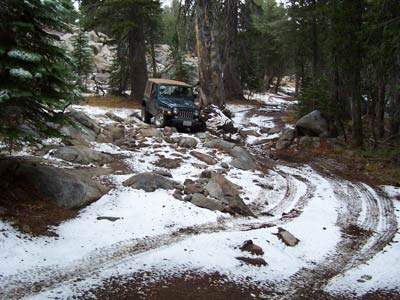 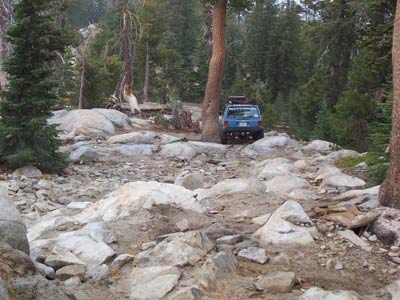 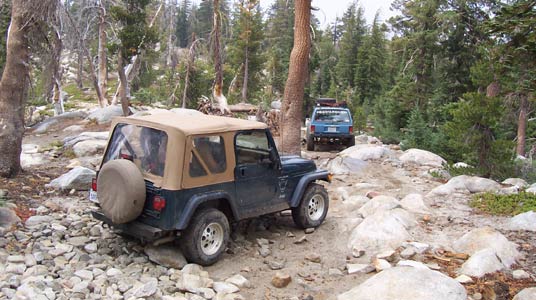 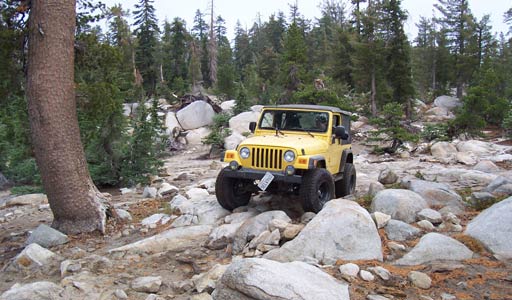 At the time I left work Friday the plan was to go down to Kelly folks house Friday night and then go with them to Santa Cruz on Saturday to go to the boardwalk and the beach and whatever that's all about. We were both kinda looking forward to it all week. It had also been a long hard week at work and I felt like I needed a distraction to unwind. When I got home Kelly told me her dad was going to have to work and so they couldn't come. The other thing was that rain was on the forecast, so maybe it wasn't the best weekend for the beach anyway. Nether of us wanted to just stay home though, so we tossed it around a bit and decided to go back up to the same area where I had taken the teachers a few weeks before and camp at Mud Lake.

We didn't get there till well after dark. We set up our tent in the wind. The sky was clear and the moon was bright. The shadowy reflections of the trees and the stars on the lake made me think of a trip I had taken a few years earlier. What beautiful mountains we have so close. We were in bed at about 9 and stayed up talking for a while. During the night the wind died down. At 3am it was as silent as a grave. At around 7am I got up to answer nature's call and a thick curtain of white fog had settled in. It was very pretty. It reminded me of a picture in a coffee table book. I got back in my bag and snuggled in next to Kelly to enjoy one of my favorite parts of camping; laying in bed lazily in the morning with nowhere to be. Not a minute later though it started to snow. Mud lake is at about 7800 ft and I had heard the snow level would reach 7500 on the western slopes so it was not a real surprise to have snow. I was glad in fact. It was as if mother nature was saying “don't go to bed. Here, I'll make it even more pretty.” The snow only lasted a hour or so. After we had our fill of the morning laze, we packed up the tent and headed out. Just before we were ready to head out, two Jeeps came by headed for the dead end of the road. We rolled out and headed for the top of the ridge. The two jeeps showed up in my rear view mirror. I pulled over at the first wide spot to let them by as they seemed like they wanted to go a bit faster than my nowhere-to-be morning pace. The first guy pulled up next to me and long story short they decided they wanted to follow along with us. It is always nice to travel in a group when driving off road, so I was glad to have them. They turned out to be really nice guys and as we traveled along we got to know each other a bit. For the next four or five hour we quietly rolled along a the snow dusted trail shrouded by amazingly beautiful fog. It was one of the finest days of wheelin I have ever had. The trail was not really much of a challenge and that was fine. It was the kind of day that would take a poet to really do justice. But hopefully the pictures will give you a hint at the beauty. To see them full size you can click on them.

You can download a GPX file that showes where we went.

Do not go gentle into that good night, Old age should burn and rave at close of day; Rage, rage against the dying of the light.

Though wise men at their end know dark is right, Because their words had forked no lightning they Do not go gentle into that good night.

Good men, the last wave by, crying how bright Their frail deeds might have danced in a green bay, Rage, rage against the dying of the light.

Wild men who caught and sang the sun in flight, And learn, too late, they grieved it on its way, Do not go gentle into that good night.

Grave men, near death, who see with blinding sight Blind eyes could blaze like meteors and be gay, Rage, rage against the dying of the light.

And you, my father, there on the sad height, Curse, bless me now with your fierce tears, I pray. Do not go gentle into that good night. Rage, rage against the dying of the light. 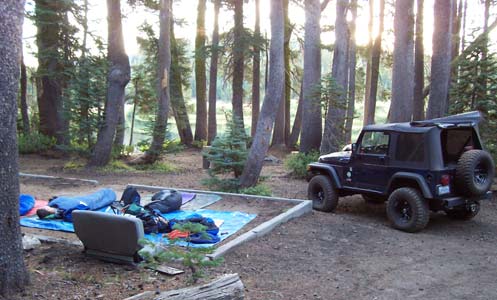 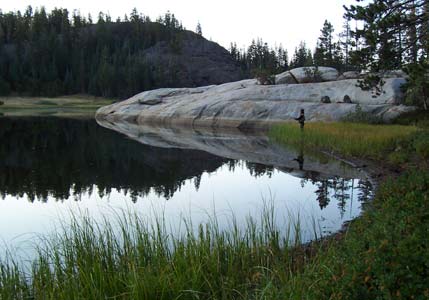 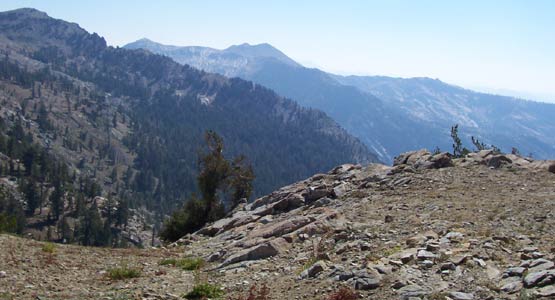 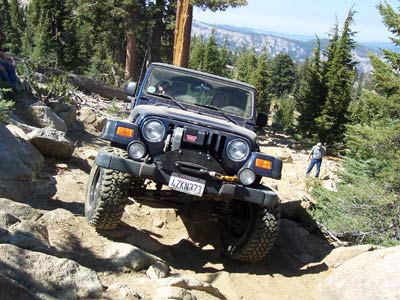 Last weekend I went on a jeep trip with the teacher quorum form our ward. Only four boys ended up coming. By the time we got everyone rounded up Friday night and drove the 40 minutes to the trail head it was dark. At this point it was me and my jeep, another guy from the ward and his TJ and the four boys. We had the boys air the tires down at the trail head. Most of them had never heard of doing that. And I disconnected the sway bar. Then we drove in about 20 minutes to Mud lake where we set up camp. Everyone else just rolled out there beds on an old building foundation but I set up a tent. The boys set a world record for scouts and went right to bed while us leader stayed up chatting around the lantern (no fires are allowed this time of year). The next morning we broke camp and got ready to roll. Two other guy with jeep met us so we had one jeep for every scout. It was fun for them. We even let them drive. It was funny they were all between 14 and 16 so they are on the verge of learning to drive. Driving a jeep with an 80 to 1 low gear at 1.6 mph however is something that is fairly easy for anyone. The weather was perfect at around 80. The week before had seen summers last gasp with temperatures pushing 100 so we lucked out. The trail started at highway 88 at a place called Tragedy Springs. From there it follows approximately the route the returning members of the Mormon battalion took on there way to meet up with the saints in Salt Lake. It is called the Melissa Coray peak trail after the wife of one of the member of the battalion who traveled with them and Tragedy Springs is where three members of a scouting party for the Mormon battalion where found killed. Anyway I do enjoy living close to such a beautiful wild area and it is fun to take the boys to an area rich with Mormon history. 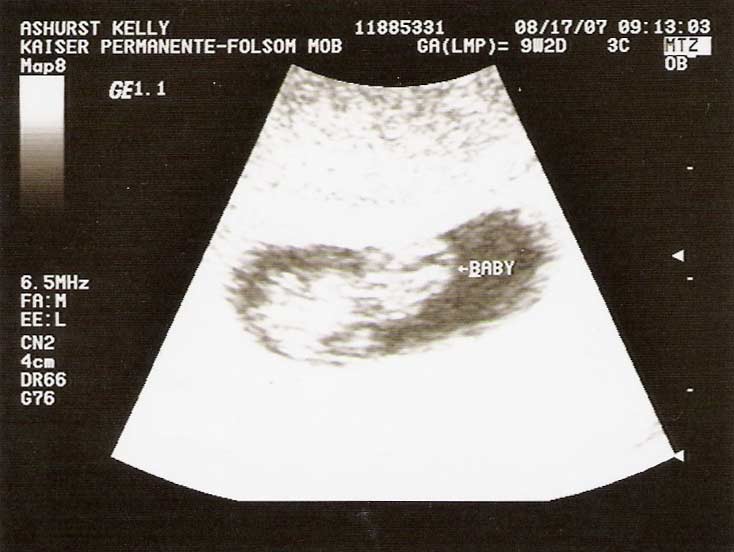 Today the post from Monday finally got read by someone. In fact it was my brother Joe who first saw the post. He then sent an email to everyone in my family suggesting that my blog might be worth a look. As I tried to get through the normal problems of a busy afternoon at work I was interrupted repeatedly by my family calling to express their excitement at the news. Kelly and I had been trying to keep it on the down low even between our selves, but as I talked to each sister and brother my level of excitement crept up.

Today by coincidence is the four year anniversary of Kelly and I's first date. It is strange to think that it was only four years ago that I was all single and stuff and now I'm a few months away for being a family of three. It's hard for me to think of what life was like before Kelly and I'm sure in a few years I will have a hard time thinking about what life was like without kids. Anyway thanks for all your support. Please keep us in your prayers there are still six long months of uncertainty to go.