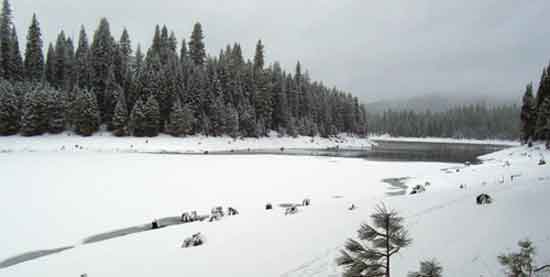 I lead a small group of boy scouts on an expedition to find a geocache today as part of a search and rescue drill. The cache just happened to be right in the area we were instructed to "get lost" in as artificial victims. We snowshoed from the main road along a side road for about a mile and a half and then cut through the trees about another half mile to the lake. The scouts found the cache after an initial "we will never find it" and a bit of cajoling. I had located it showing under some snow cover bark almost immediately. Unfortunately our search and rescue dog team never did find us. We finally ended up hiking back to the cars after several hours of boredom to find the Rescue team was standing around at our cars. "Base this is Rescue thirteen. We have located the subjects vehicle and after an exhaustive search of a 10 foot radius we have concluded from the tracks that the subjects have feet". I don't know what the deal was but I guess that's why they needed practice. They actually seemed kind of annoyed at us that we hadn't waited for them to find us. We had been out there from 9am and it was 12:30 when we got back to the cars. Despite not being found It was a good time. It snowed off and on all day and it was a very pretty area.

Kelly and I went to see the Narnia movie. It was a really fun story that I remember from my youth. I also thought that the acting was good considering children actors. I must say however I was really kinda disappointed in the "special effects". Some of the scenes were so obviously blue screen that it was a distraction. And the sword that the oldest brother was waving around appeared to be made of rubber as it could be seen flexing and jiggling. Now I'm not a big special effects guy. I don't go to a move because it's supposed to have sweet special effects but when I keep getting batted back to reality by the poor special effects that's where I draw the line. Anyway notwithstanding the poor technical aspects of the film we did have a very nice time. Kelly's sister had given us movie passes for Christmas and we used them. It is one of the best perks of being married that every time you go to the movies you know your date is going to snuggle with you and give you a little kiss when the protagonist makes it out of a tight spot.

We ended up leaving a day early because Thursday was the calm before the storm. We got a later start than we like to because I had to swing by work and get some files and get things going, but we made record time due to good weather and surprisingly light traffic. So as an added bonus we got to go to Winter's birthday party on Friday. A half a dozen of Winter's friends showed up to eat burgers and cake and play on the big indoor playground. The next morning we all piled into Joe's mini van to go pick up Josh and Ruthie from the airport. We hadn't seen either of them in a really long time. Josh since our wedding in July 04 and Ruth since August 04. They were both looking very good. Josh had that Hawaiian tan and Ruth the post mission glow. We all stayed up and played games and ate junk waiting to welcome the new year. Then after it came nobody seemed to want to wind down. Josh and Joe and I just sat around chatting and sharing stories. It's so fun to just hang out with family. We all managed to make it to church in the morning at 11:00 for Ginger's blessing. Just as the Bishop started to announce the blessing the lights flickered for a second and then went totally out. The battery powered spotlights kicked on and Joe blessed Ginger in top form. There was one talk given by flashlight and then the rest of church was canceled. At about 3:00 Josh, Kelly and I loaded up Bella and took off for Angela's new place in Salt Lake. Josh left the next morning before we got up. It was really fun to get to spend time with him. It's really a bummer he is so far away. Kelly and Ang did some shopping while us boys watched the cleanflix version of Revenge of the Sith.Toward the evening we jumped into Angela's Mini van and headed for Salt Lake City to see what we could find to do. We didn't have a real solid plan but we ended up taking a hike to the top of Ensign Peak right before sundown. Kelly made it all the way to the top. Next we headed over to the church museum to see the Joseph Smith Exhibit showing there in celebration of his 200th birthday. I thought the coolest thing was a big maroon handkerchief that Joseph had given to Wilford Woodruff to use to heal two children. Tuesday morning we got a reasonably early start and went up to see Kelly's Aunt Sissy in Park City and try out Kelly's new snow shoes. It was the perfect day for it. There was a lot of fresh snow but the sun was out and it was a beautiful day. Kelly did very well for her first time on snow shoes. That night we had the obligatory dinner at Wingers. Kelly loves Wingers and truth be told I think it's really good too. We try to go every time we are out in Utah. The next day was the drive home. The endurance stretch from Salt Lake to Reno and then the hard part over the mountains and home. It always makes for a long day. Once again it was a fine trip. Kelly is a wonderful travel companion and makes these kind on trips so much fun.